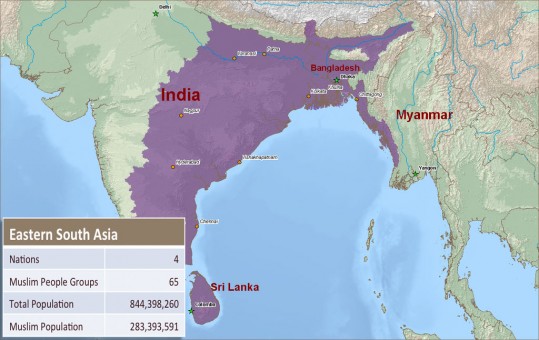 Amid is the leader of a rapidly growing network of movements in Eastern South Asia. I had the privilege of interviewing him and several of his colleagues on a sweltering June day.
“How many followers of Christ from a Muslim background do you know about?” I asked. “How many have been baptized?”
There are more than 30,000 now who are followers of Jesus, but only 16,000 have been baptized so far, but it is growing. We have a long way to go.
“And how did you come to faith in Christ?” I asked.
From what I read in the Qur’an, he said.
“What could you possibly have read in the Qur’an that would turn you to Christ?” I asked.
Amid smiled and rolled off a litany of reasons that he had undoubtedly shared hundreds of times before:
I saw no honorable titles for Muhammad, but 23 honorable titles from Allah to Isa (Jesus). Next I found that Muhammad is a sinner, but Isa is pure. Muhammad is not with Allah now, but Isa is with Allah now. Muhammad is not coming again, but Isa is coming again. Muhammad is not a sign of the last Judgment Day, but Isa is a Sign of the Last Judgment Day. Muhammad is not nearest to Allah, but Isa is the nearest to Allah. Muhammad is not the sign/image of Allah for everyone, but Isa is the sign/image of Allah for everyone. Muhammad is dead, but Isa is alive with Allah. Only four times does the Qur’an speak about Muhammad, and yet 97 times it talks of Isa al-Masih. No miracles are shown by Muhammad in the Qur’an, but so many miracles shown by Isa al-Masih in the Qur’an. Jibreel (Gabriel) is teaching Muhammad, but Allah is the teacher of Isa al-Masih. No mention of Muhammad’s parents in the Quran, but all of Isa’s parents are mentioned in the Qur’an. Muhammad is the human seed, but Isa is virgin born. From the women’s side, there is no mention of Fatimah in the Qur’an, but Miriam (Mary) is the greatest woman among all women according to the Qur’an. There is doubt among Muslims about Muhammad’s birthday, but all over the world, Isa’s birthday is celebrated. There is also doubt about how many wives Muhammad had, some said 11, 14 or 20. Muhammad is not a Savior according to the Qur’an. Isa’s name is ‘Savior.’ Seven signs are given by Allah to the Seven Prophets, but no sign at all is given to Muhammad. Isa is Ruhullah (the Spirit of God), Muhammad is not. Isa is the Word of Allah, Muhammad is not.

Read more in David Garrison’s new book A Wind in the House of Islam.“